Carahsoft, in conjunction with its vendor partners, sponsors hundreds of events each year, ranging from webcasts and tradeshows to executive roundtables and technology forums.

Attendees of this webcast learned how MarkLogic can:Extend the life of legacy systems by establishing an Enterprise Data LayerRein in multiple and changeable data sourcesPut information in geospatial, temporal, and semantic context

During this webcast, attendees learned how VMware vCloud Government Service:Is an infrastructure-as-a-service hybrid cloud offering which operates with a FedRAMP P-ATO issued by the Joint Authorization Board (JAB)Meets the unique requirements of government customers through the secure cloud ...

Integrate Your LMS with Virtual Classrooms

This webinar demonstrated how to seamlessly add Adobe Connect virtual classrooms into your workflow with learning tools interoperability (LTI) integration for your LMS. Specifically, it covered how to:Build an engaging virtual classroomSet up LTI inside Blackboard, Canvas, D2L, and MoodleLaunch a ...

Attendees of this webcast learned how to create: A centralized app governance platform reaching data security at the FIPS-199 High watermark within the app layer Comprehensive, fine-grained security and management controls around individual apps, effectively bringing apps "under management" A ...
Webcast

The 5 Keys to Achieving Next Generation Customer Experience

Cut Through the Complexity with Wire Data

During this webcast, attendees learned how wire data (all L2-L7 application communications happening in your network) can do the following: Provide transaction-level visibility across physical, virtual, and cloud environments Monitor performance and user behavior in real-time Cut troubleshooting ...

Attendees of this Pizzacast heard F5 discuss: What DDoS protection looks like in today's enterprise data center Security solutions for the most sophisticated attacks in the DDoS threat spectrum Understanding the hybrid approach to mitigating DDoS attacks Using ...

This webinar demonstrated how historical and live traffic data are used to improve performance during all stages of a disaster. Specifically, this webinar discussed: Navigating up-to-the minute incident and congestion informationDetermining the fastest route and accurate ETA at different ...

Attendees of this F5 | FireEye TechTalk discussed: How to identify which traffic to sendHow to handle decryption and re-encryption of that trafficHow to exempt sensitive traffic from being destroyed 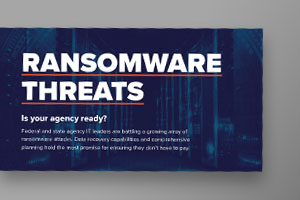 Veritas Technologies Resources
Ransomware Threats: Is Your Agency Ready?
Federal and state agency IT leaders are battling a growing array of ransomware attacks. Data recovery capabilities and comprehensive planning hold the most promise for ensuring they don’t have to pay. In a new survey of federal and state government information technology decision makers, FedScoop an...
READ MORE > 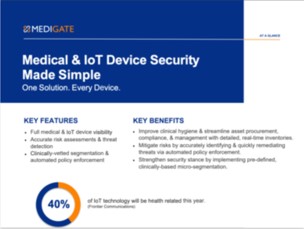 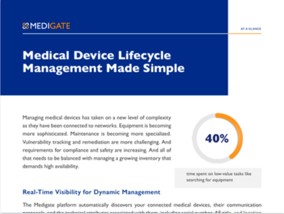 Medigate Resources
Medical Device Lifecycle Management Made Simple
Managing medical devices has taken on a new level of complexity as they have been connected to networks. Equipment is becoming more sophisticated. Maintenance is becoming more specialized. Vulnerability tracking and remediation are more challenging. And requirements for compliance and safety are i...
READ MORE >
< Previous1...4567891011121314...691Next >