DevOps and DevSecOps are philosophies, movements and even cultures of continuous improvement and integrated security – at scale. The result delivers a powerful advantage for government agencies who are undergoing digital transformation: faster releases, more secure releases, greater interoperability and the freedom to focus on the mission. Carahsoft represents proven solutions, delivering to agencies the innovative solutions needed for every phase of the DevOps and DevSecOps lifecycles and with security built in every step of the way. These solutions deliver support for collaborative planning, rapid code builds, iterative testing, rapid release, optimized deployment and ongoing monitoring that continuously feeds into the next wave of planning.

Atlassian: How NASA Builds and Deploys Mission Code in 24 Hours

Developing software that allows humans on Earth to operate a variety of remote space explorers is no small task. Building and deploying that new code in 24 hour increments makes it even harder. But that’s exactly what the NASA Jet Propulsion Laboratory, Ames Research Center and Johnson Space Center have teamed up to do.

To help these cross-country collaborators tackle high-stakes issues, they created a project called Ensemble. And to fuel Ensemble, JPL turned to Atlassian. Ensemble uses Jira and Confluence to stay on the same page with projects and requirements, and Bamboo to keep the code clean and fast.

One Ensemble project, an unmanned Mars rover named Curiosity, uses lasers, spectrometers and stereo cameras to investigate whether the surface of Mars could support microbial life. Curiosity sends data back to Earth once a day, using a cloud-like computing hive with roughly a thousand CPUs. Curiosity’s operators crunch through the day’s data in a few hours, then beam up a task list for the next day.

Atlassian Bamboo powers a continuous deployment ipeline that delivers software updates to JPL’s cloud as fast as the Ensemble engineers can crank them out. Code from six active branches is built using custom scripts, invoked by Bamboo. Each successful build is then deployed to, and rigorously tested on, two preliminary environments before going into operation.

Ensemble’s engineers have the best bragging rights in the universe: The code they write on Monday is driving unmanned rovers on Mars on Tuesday.

A prominent agency in the national security space was tasked with modernizing its mission applications quickly – but also securely. This customer historically had a decentralized Jenkins environment with little visibility or management ability, leaving development teams to work on their own scattered “islands.” This presented major roadblocks to collaboration and scaling up.

To achieve its objectives, the agency chose CloudBees Core as the enterprise-grade CI/CD solution to orchestrate and speed up the delivery of new mission capabilities. This allowed the agency’s developers to adopt a multi-tenant enterprise platform, using CloudBees Core in its software factory to produce critical\ constituent-facing applications through trustworthy DevSecOps pipelines.

The automation inherent in CloudBees Core empowered the teams to focus their talents on writing code, without squandering manual effort on time-consuming things such as user management, plugin configuration, or security bottlenecks.

Concurrently, the shared services and security teams leveraged CloudBees Core’s automation power to apply governance enterprise-wide, and well-orchestrated software delivery pipelines gave them the confidence that capabilities were being released within the confines of the organization’s security policies and best practices. Today, the agency's 750+ developers are using CloudBees Core to produce capabilities at an ever-increasing velocity, with security built in from the start.

"It's a critical balance of security, quality, speed and governance," said Brian Dawson, DevOps evangelist at CloudBees. "One of these imperatives cannot be sacrificed for another. We engage our government customers with the focus and experience necessary to help federal agencies deliver on their mission and keep developers focused on what they do best: writing code."

Bringing new capabilities to the U.S. Air Force’s fleet of F-22 Raptor fighter jets is no small feat. The Lockheed Martin F-22 is the world’s most dominant fighter jet, but the legacy process for updating the jet’s underlying software was mired in the traditional waterfall process.

It previously took five to seven years to identify requirements and release new capabilities for the existing architecture. That time-consuming process, along with code quality and integration issues, led to onerous rework and customization. Warfighters were not getting critical capabilities fast enough.

Lockheed Martin sought to create a team culture rooted in innovation and collaboration to transform its approach to application development. The company chose Red Hat Open Innovation Labs to lead it through the Agile transformation process and help implement an open source architecture onboard the F-22, while simultaneously disentangling its web of embedded systems.

Through this eight-week Red Hat Open Innovation Labs residency, Lockheed Martin Aeronautics replaced the waterfall development process it used for F-22 Raptor upgrades with an agile methodology and DevSecOps practices that are more adaptive to the needs of the U.S. Air Force.

Together, Lockheed Martin and Red Hat created an open architecture based on Red Hat OpenShift Container Platform that has enabled the F-22 Raptor scrum team to improve its ability to forecast for future sprints by 40%.

This summer—just one year after kicking off the project--Lockheed Martin is on track to deliver new software-defined capabilities three years ahead of schedule and is continuing to scale this approach to the entire F-22 development organization. 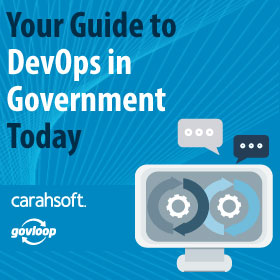 Interested in learning more about DevOps solutions? Fill out the form below and a Carahsoft representative will be in touch to schedule an information session.