The passage of the Modernizing Government Technology (MGT) Act at the end of 2017 reaffirmed what many federal, state and local agencies have known for the last two decades: The future is digital, and the ability to continue effectively executing agency missions requires them to embrace this transformation. The Act actively encourages modernization by creating a Technology Modernization Fund to provide agencies a means to acquire funding for new, innovative projects and by authorizing certain agencies under the CFO Act to establish IT Working Capital Funds to fund future modernization projects. The MGT Act — combined with other recent initiatives such as the 21st Century IDEA Act — has set the stage for a new era of digital government and optimized service delivery.

So how can agencies leverage the momentum around IT modernization? Read the latest insights from Dell and its strategically aligned business partners, including case studies from other government agencies: 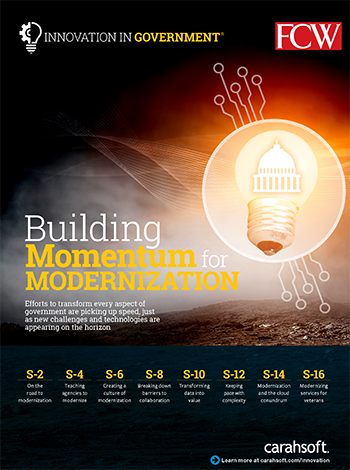 Read more insights from Dell and its strategically aligned business partners when you download the full report below:

Read more insights from Dell and its strategically aligned business partners when you download the full report below: