For government, artificial intelligence (AI) promises to streamline operations, facilitate decisionmaking and improve customer services in ways that weren’t possible before. Agencies have already begun using machine learning, robotic process automation, the internet of things and other AI tools to improve operations, but in many ways, AI’s potential is still untapped. In a recent survey of FCW readers, 72% said their agencies have not begun deploying AI-based tools, and 70% said their teams had no training in data science or AI.

Fortunately, numerous efforts to promote AI are underway across government. Most notably, the White House issued the Executive Order on Maintaining American Leadership in AI last year and announced the American AI Initiative, a national strategy “to sustain and enhance the scientific, technological and economic leadership position of the United States in AI R&D and deployment.” To reinforce this momentum, the fiscal 2020 budget provides about $850 million to support the White House’s American AI Initiative at four agencies — Energy Department, National Institutes of Health, NIST and National Science Foundation. The Networking and IT Research and Development Program issued a supplement to the budget that added AI as a program component area for the first time and made a non-defense budget request of $973.5 million for AI.

With the increased emphasis and funding around AI and machine learning, how can agencies ensure they are staying ahead of the curve and reaping the benefits these new capabilities make possible? Read the latest insights from industry thought leaders in artificial intelligence, including: 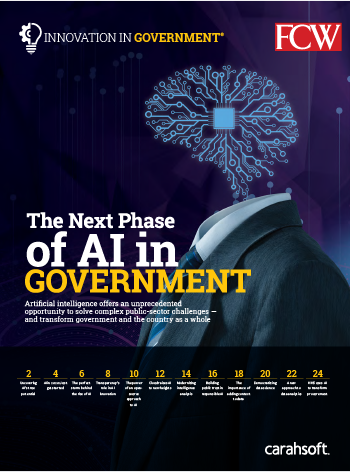 Read more insights from Carahsoft and our artificial intelligence partners when you download the full report.

Read more insights from Carahsoft and our artificial intelligence partners when you download the full report.