The GAO Report and Defining FRT

The most recent Government Accountability Office (GAO) report published in August 2021 followed heightened public concern regarding the use of facial recognition technology (FRT) by federal government agencies. At the request of Congress, the report surveyed 24 agencies listed in the Chief Financial Officers Act of 1990 over the 2020 fiscal year.[2]

Facial recognition, one of several types of biometric identifiers like DNA and fingerprints, maps out a mathematical formula of an individual’s face. This faceprint or facial signature creates a unique way to verify identity. A FRT system’s algorithm then compares the information to find matches within the database. Experts attribute some of the controversies surrounding FRT to a misunderstanding of its definition and the differentiations between functions. Facial verification seeks to confirm identity by comparing two photos to ensure they are the same person. Facial identification pulls from a database for the closest matches to a photo. Facial analysis classifies a face’s personal characteristics and determines expressions.[2] The report distinguishes between the different facets of the technology but for the purpose of the study, the GAO includes all of the above under the umbrella of FRT.

In the GAO survey, researchers evaluated current usage and discovered that of the 24 agencies surveyed, 18 used facial recognition technology during 2020 for one or more purposes.[3]

Agencies that applied FRT include: 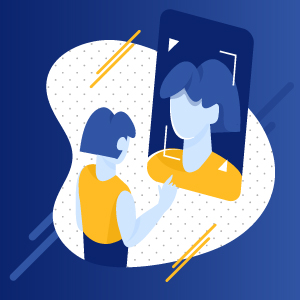 To run these recognition searches, the government continues to build internal databases, purchase external commercial software, and collaborate with other internal agencies to cross check and obtain additional records. The Defense, Justice, and Homeland Security departments own two thirds of federal FRT systems.[4]

The most prominent third-party system government agencies use, Clearview AI, is wrapped in lawsuits and controversy over their collection of photos pulled from social media to build their database without users’ knowledge or consent. Some statements claim up to 3,100 or 17% of federal, state, county, and municipal agencies employed Clearview’s technology.[5] Despite public criticism, more government agencies hope to use Clearview’s system to draw from their exponentially expanding 2022 repository of over 10.5 billion faces.[6]

Over the 20 years that government agencies and police have utilized FRT, they were generally restricted to only scanning government-provided images like mug shots and driver’s license photos.[7] Now, access to systems like Clearview have changed that. Most of the expansion plans fall under three categories: system updates, problem solving, and new features.

The State Department wants to implement a new FRT-based program using the Personal Identification Secure Comparison and Evaluation System (PISCES) border management system to evaluate travelers for suspected terrorists. The DHS plans to pilot a similar program with TSA and forecasts by 2023, facial recognition will be used on 97% of travelers.[8] Other additions include the U.S. Marshals Service plans to construct a touchless prisoner identification system for the jail and prison networks. Pending funding approval, the Department of Agriculture hopes to use FRT to scan live surveillance videos for people on watchlists.

Ten agencies working on research and development seek to improve systems’ accuracy, reduce false match rates by increasing the algorithms’ training database, and teach FRT to recognize individuals wearing masks.[5]  Through their research, the State Department hopes to eliminate the challenge of aging confusing recognition systems. The Department of Transportation’s research would allow for FRT to evaluate commercial truck drivers, train drivers, and air traffic controllers’ eyes for signs of distraction, drowsiness or fatigue.[9] While government agencies have extensive plans for FRT, the path forward with expansion abounds with many challenges.

Challenges Confronting Future Use of FRT

The major concerns with government FRT and protests to its expansion stem from issues with racial bias, inaccuracy, loss of privacy, and a lack of oversight. Initial reviews into FRT systems in the late 2010s returned some troubling data regarding the technology’s accuracy and bias. Recent studies reveal significant system improvement; however, other challenges remain at the forefront.

Results of the GAO survey showed that 13 agencies were unaware of their employees’ usage of non-federal facial recognitions systems. This discovery prompted the GAO’s recommendation that agencies initiate a tracking mechanism to close this oversight gap and address the risks involved with employing non-federal systems like Clearview.[10] In early 2021 before the GAO report was released, over 35 civil rights groups had already petitioned for legislation that would halt government usage of FRT and finalize legal standards of usage.[10] Currently, no federal regulations are in place to provide accountability regarding these issues and local bans that many cities and states have resorted to do not inhibit federal usage. In the absence of congressional laws, Amazon and Microsoft enforced moratoriums and temporary bans on selling their facial recognition technology to the government.[11]

Uncertainty shrouds the future of FRT, but until official regulations fall into place, government agencies are pursuing the latest system updates and upgrades. The GAO report offers a better frame of reference on current usage and insight into government agencies’ plans for growth while legislation is pending.

[4] “Summary of the GAO Report on Federal Use of Facial Recognition Technology,” Lawfare, https://www.lawfareblog.com/summary-gao-report-federal-use-facial-recognition-technology

[5] “US government agencies plan to increase their use of facial recognition technology,” Technology Review, https://www.technologyreview.com/2021/08/24/1032967/us-government-agencies-plan-to-increase-their-use-of-facial-recognition-technology/

[8] “What is Facial Recognition – Definition and Explanation,” Kaspersky, https://www.kaspersky.com/resource-center/definitions/what-is-facial-recognition

[9] “Federal government to expand use of facial recognition despite growing concerns,” The Washington Post, https://www.washingtonpost.com/technology/2021/08/25/federal-facial-recognition-expansion/