Skoog and Hook were honored in the Government category for their career-long dedication to implementing digital terrain solutions for safer aviation. The USGIF Awards recognize the exceptional work of the geospatial intelligence tradecraft’s brightest minds and organizations. Award winners, announced last month, were nominated by colleagues and chosen by a USGIF subcommittee. 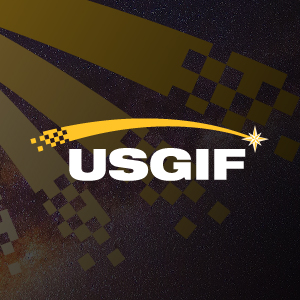 Preventing the top cause of aviation fatalities

Skoog and Hook were lauded for spearheading the development efforts of NASA’s Automatic Ground Collision Avoidance System (Auto GCAS), which prevents imminent collisions for fully functional aircraft through a last-minute, high-authority autopilot. Controlled flight into terrain is the number one cause of aviation fatalities but can be made safer through digital terrain mapping.

Auto GCAS offers a high level of autonomy in aviation, waiting until the last possible moment to take control of the aircraft. Thanks to Auto GCAS technology, the autopilot maneuvers to avoid terrain at the latest possible point in time and returns control to the pilot as soon as possible.

Skoog began working on terrain-referenced navigation systems in the late 1980s, followed by ground collision avoidance systems on a highly automated research F-16 in the 1990s. For Auto GCAS, his work involved traveling the world, testing and evaluating myriad digital terrain systems and collecting data everywhere from Sweden to Hawaii to compare the products and their data sets. His team also extensively tested Auto GCAS against every category of controlled flight into terrain mishaps—and found it would have prevented every one.

Convincing pilots to buy into the system was one of the biggest challenges faced by Skoog, Hook, and their team. Fighter pilots are notorious for not wanting to relinquish control of their aircraft. A system that presents too many false warnings or interferes with a fighter’s ability to focus on the mission will likely be turned off or ignored. The team needed to show that Auto GCAS helps save their lives without impeding their abilities to control their planes.

As Lt. Col. Tucker Hamilton, Former Commander of the 461st Flight Test Squadron, put it: Skoog’s Auto GCAS team “came together, proved the technology, advocated for it, and got it on F-16s.” That work, he added, “accelerated implementation on [F-35s] by seven years because of the advocacy of the test professionals.”

Already, Auto GCAS has dramatically reduced the number of F-16 related fatalities. Since the system was fielded in the F-16 fleet, the Auto GCAS system has saved the lives of 10 pilots, and has helped to significantly decrease controlled flight into terrain as a fatal incident.

The auto-GCAS technology is improving to include recent advances in higher fidelity digital terrain maps and the need for GPS validation and navigation in GPS-denied environments, like the image reference navigation technology from Terra Pixel.

Auto GCAS is the culmination of a decades-long effort to bring geospatial intelligence to aircraft safety. The Auto GCAS Team is a partnership among the U.S. Air Force, the Office of the Secretary of Defense, Lockheed Martin and NASA, with Skoog and Hook serving as the mapping experts within the DoD aviation community, all the way up through the Pentagon.

This isn’t the first award Skoog and Hook have received for their leadership, persistence and teamwork. The Auto GCAS was awarded the 2018 Collier Trophy, marking the first time the honor was given to a software-based system like a digital terrain model. Previous recipients include Orville Wright, Amelia Earhart, and the Apollo 11 crew for landing on the moon.

“The 2020 USGIF Awardees reflect the importance and the significance of the outstanding work that occurs daily in the GEOINT community.  You will see how the GEOINT Community always rises to the occasion to face head on the world’s toughest problems and this year is no exception,” Kevin Jackson, chair of the USGIF Awards Subcommittee, said in a news release.