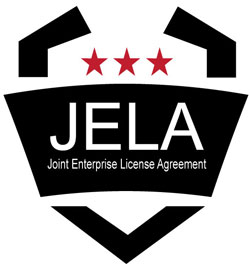 Why Do We Need a Joint Enterprise License Agreement?

If you had to decide whether to do the same thing thousands of times or just once, which choice would you make?

The question of how to reduce an enormous number of transactions is just one consideration that sits directly at the foundation of why an organization would consider agreeing to become party to a Joint Enterprise License Agreement — better known as a ‘JELA’.

The power of numbers

Wait – did you just buy that too? Often, personnel throughout an organization will identify similar software requirements to support their varied missions.  Each will follow the traditional route to purchase the applications they need.  While it may be quicker to expedite, the extended numbers of these actions done on an ad hoc basis never realize the benefit of getting volume discounts on pricing, fail to avoid the overhead costs imposed on each transaction, and end up costing more time and money for contracting or fiscal personnel to go down the same path over and over again.

And, aside from just the price tag for financing, consider the overhead costs of testing certifying, bundling, distributing, patching, maintaining, updating, and configuring this same software for thousands of end points.

Know the process and it will set you free

An executive officer of mine once told me the secret to avoiding DoD policy challenges was to understand the process so well, that you could avoid the obstacles.  Enter the JELA.  The main point of establishing a centralized method to purchase and distribute software is to combine all of those previous transactions into just a few.  And, by standardizing which applications are offered, a basic collection of products can be offered to multiple organizations that all happen to have the same needs.

Everybody in the pool

Recognizing the overall benefit from joining forces, the Army, Air Force, DISA – and most recently OSD (Washington Headquarters Service) teamed up.  While they all had varying periods of performance remaining on myriad contracts for different software, they were able to negotiate adjustments that would bring them all in line under a single renewal date.  With the legwork done in advance, the main contracting office for the JELA, Defense Information Service Agency – DITCO, can now focus on modifying just a single contract.  But the impacts of that single transaction are huge: standardizing licensing, reducing costs and improving interoperability, collaboration, document services, and publishing capabilities for nearly 2.6 million DoD personnel.

Being good stewards of the taxpayer’s dollar is key.  By buying licenses in bulk, the combined savings or cost avoidance of the Adobe JELA (depending on your perspective) for software alone was more than $300 million, versus the same set of products listed on GSA schedule.  More simply put – the JELA offered government IT folks a discount on technology they had already been purchasing before, in some cases up to 94%.

Not for everyone, though

The caveat to entering a JELA is for those organizations that have complex software configurations or mixtures, which may not lend themselves to being limited to just the most broadly used applications from a software manufacturer.  However, taking a look at parsing the largest block of software you require and working toward a lower, re-negotiated price may still be an option.

In the case of Adobe tools, for example, many organizations may already use various enterprise and desktop software such as Captivate, ColdFusion, Creative Suite and Acrobat.  For some, though, it still works to their benefit to just take advantage of the pre-negotiated discounted rates for JELA enterprise tools (Acrobat Pro and AEM Document Services) and the Creative tools (20-plus apps within Creative Cloud); then complete a separate purchase of the non-JELA apps (Captivate and Cold Fusion).

The other benefit of a JELA is that it is an open agreement – meaning that other agencies can join as well – and take advantage of the common benefits.  The Adobe JELA also offers this option.

If you want to find out more about the JELA or talk directly with a government representative to get the straight scoop, additional resources are provided below for more information.