Since early 2008, virtualization – which allows Pennsylvania’s Office of Information Technology to run numerous virtual servers on one physical server – has been a major part of the state’s consolidation strategy.

“Our virtualization efforts to date have been extremely successful and are the foundation of our broader vision of providing private cloud services to state agencies – essentially transforming our operational model into an ‘IT as a Service” platform,” said Pennsylvania CIO Tony Encinias. 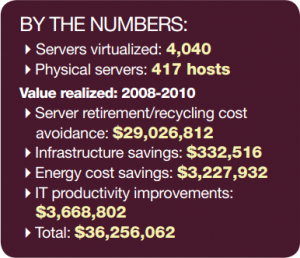 A study by VMware and Government Technology analyzes this data across energy savings, productivity improvements and the server retirement cost avoidance.

“We must become customer-centric to allow us to be the preferred IT service provider for agencies,” said Encinias. “By becoming more efficient on the infrastructure side through virtualization and developing sound back-end IT business processes, such as adopting the ITIL framework, we have a sound model for success.”