Nationwide, many government agencies are realizing that traditional approaches to cybersecurity are no longer enough to protect against increasingly sophisticated adversaries and navigate a complex threat landscape. For example, cybersecurity strategies have historically focused on the perimeter, ignoring the risk of internal threats and failing to account for mobile devices or teleworking employees. In an era of tightening budgets and rising citizen expectations, government must adapt to these modern realities. Cyber intelligence uses behavior analytics, network visibility, and operational and threat intelligence to make agencies smarter about today’s threats. If your agency is in need of a forward-looking cybersecurity approach, get up to date with “Raising Agencies’ Cyber Intelligence,” a guide created by GovLoop and Carahsoft featuring insights from the following technology and government cyber intelligence thought leaders. 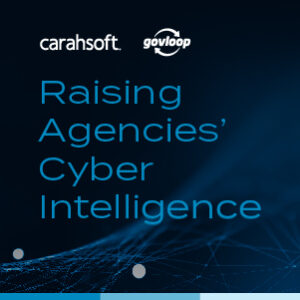 “Too often, agency leaders and cybersecurity analysts seem like they’re speaking separate languages. With both sides communicating about cyberthreats differently, getting everyone on the same page is one of contemporary government’s greatest challenges. The wider the gulf between an agency’s teams, the more vulnerable it is to external danger. Today’s security landscape contains dangers everywhere, and cyberthreats won’t wait for agency workforces to unite against them. Agencies that don’t speak the same language as their employees and employees that don’t speak the same language as their agency leaders will find themselves constantly fighting cybersecurity fires.”

“Agencies aren’t looking just at the “north-south” of traffic moving inside their network perimeters for threats. Lateral cyberattacks occur when perpetrators breach agencies’ defenses and then move freely “sideways” or “east-west” on their networks. The modus-operandi of cybercriminals today is to seek a weakly defended element, and then access sensitive data by moving laterally to avoid stronger safeguards. This protection against lateral movement is what zero trust cybersecurity is all about. By automatically distrusting everything on and off their networks, agencies can enhance their IT security.”

“Basic cybersecurity knowledge — such as which attacks are most common — won’t always keep agencies’ data safe. For scores of agencies, today’s threat landscape can change too fast for their workforces. Fortunately, threat intelligence can prepare agencies for cutting-edge dangers. Threat intelligence adds the context agencies need by focusing on the latest threats in realtime. […] The worst cyber attacks are the ones agencies never see coming. But with quality threat intelligence, agencies can stay alert to where cyberthreats might strike next.”

“Since the COVID-19 pandemic began, the number of endpoints to defend has exploded as government employees started working remotely. These endpoints include devices such as laptops, smartphones and tablets, and they are leaving agencies more vulnerable than before. Going forward, the more endpoints agencies have, the more targets they will present to cyberthreats. […] Zero trust cybersecurity addresses de-perimeterization, or the gradual erosion of network boundaries. With zero trust, users must be capable of securely accessing data from anywhere no matter where it resides.”

“One of the things I would tell you is more of a concern than it has been in the past is the large number of endpoints that are seated on our networks today, especially with mass telework becoming the norm over the last few months. Identifying and confirming anomalies and positive, adverse actions has become more difficult. It has amped up our attention on automation, machine learning and robotic process automation and bringing that into the fold to a greater degree across the cybersecurity spectrum. It is almost a must now because of the massive amounts of data to sift through to get to what you’re seeking.”

“Unlike other types of attacks where weapons require certain tactical research, there is a low effort in the cyberthreat domain. The global threat landscape will continue to have new entrants as actors build strengths and develop talent. There’s this model of a cyber kill chain. It talks about how attackers move from discovery all the way to mission completion, whatever the mission might be. If we build layers of defenses that look at that cyber kill chain, can we identify the mission actions through that cycle before the mission completes?”

“Picture the Vulnerability Disclosure Program (VDP) as the hotline for reporting DoD’s cybersecurity shortcomings. Nestled in DoD’s Cyber Crime Center (DC3), the program makes the philosophy of “see something, say something” digital. At any time, ethical hackers can alert DoD to issues ranging from insecure networks to noncompliance with cybersecurity standards such as FISMA.”

Download the full GovLoop Guide for more insights from these cyber intelligence thought leaders and additional government interviews, historical perspectives and industry research on zero trust, the government threat landscape and the latest developments from government programs like CDM.